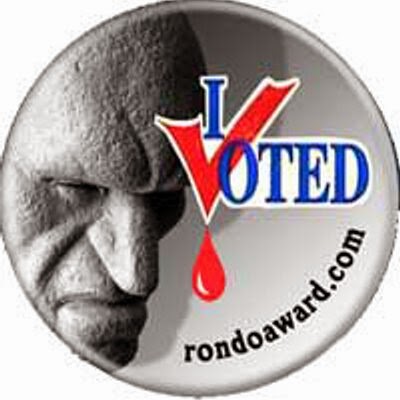 Wow were we late on posting these results, lol. Better late than never, here are the results for the 12th Annual Rondo Hatton Awards.

For the uninitiated the "Rondo's" are a fan based awards show that real people vote in all of the Horror categories from magazine covers (ie Rue Morgue,Fangoria,etc) to DVD Horror Collections, modelling, Horror Hosts (Svenghoulie,Elvira,etc) to the actual Horror Movies.

As well the Rondo's fill the gap that various mainstream awards just are too afraid to handle, because they are cowardly sniveling rats! lol.

Thanks for tuning in! -Evil von Scarry
Posted by Evilvonscarry@gmail.com at 20:49 2 comments: 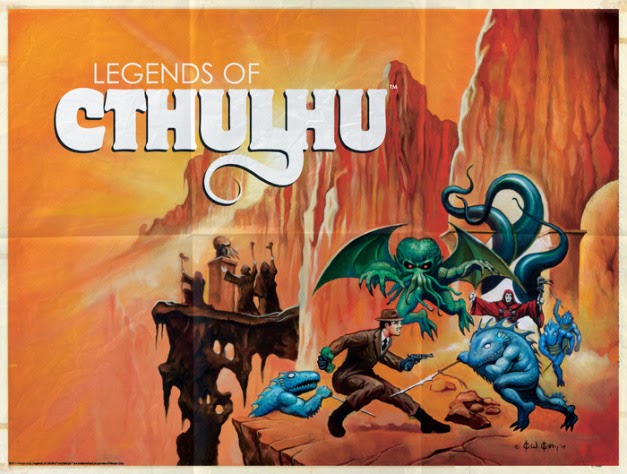 Turns out there is a kickstarter campaign (love these things!) to get Cthulu action figures made.
Sign me up!

The Legends of Cthulu series of action figures look amazing and will be made by WARPO toys.
"June 9th, 2014 – At 8 a.m. Warpo has officially launched our first Kickstarter for “Legends of Cthulhu”, the first retro styled 3.75″ action figure line based on the works of H.P. Lovecraft." 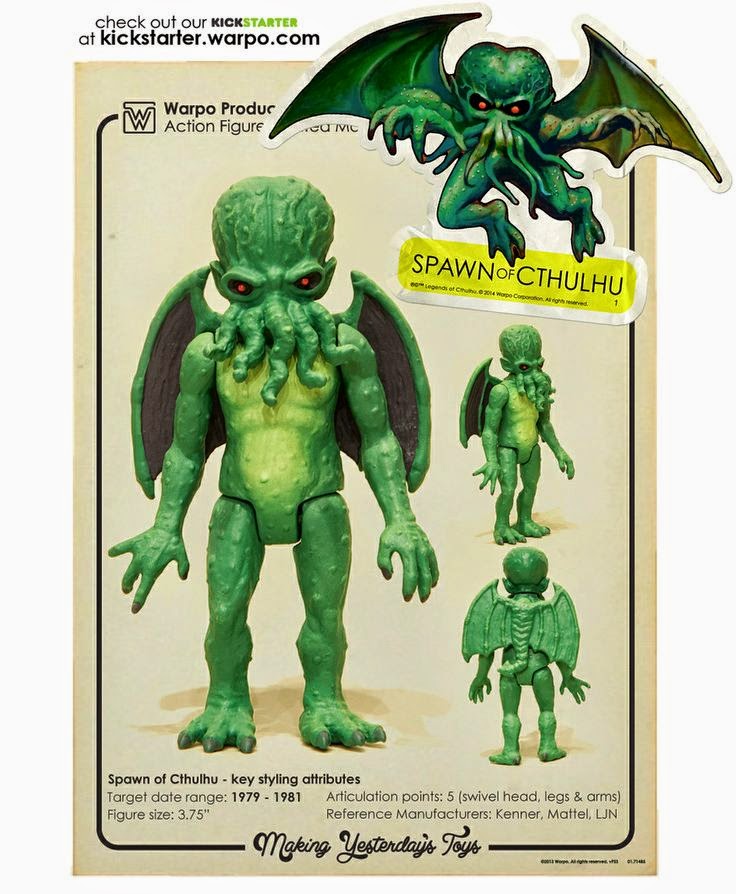 From what I can see these guys know their material and are fans of the Call of Cthulu RPG's from the 80's and Dungeons and Dragons and are passionate about getting it right. Interestingly the figures put me in mind of the Dungeons and Dragons toys from that time (which the Kount and I were HUGE fans). For further authenticity the team had hired Eddie Mosqueda (of 80s Mattel and TMNT Fig fame)There is also a Pinterest page here

Thanks for tuning in- Evil von Scarry
Posted by Evilvonscarry@gmail.com at 17:27 No comments:

Wow, it's been a long time since I have wrote on here. I'll be honest I've never been much of a writer, and have always had difficulty converting the jumbled mess in my noggin to paper(type). Initially I started blogging on here to SIMPLY show some things I thought were cool, much like one does on facebook. It somehow mutated into doing reviews, which god love em' , for those who can write them properly. Unfortunately, I've always kinda hated doing lengthy reviews.  So tomorrow I climb aboard a plane, a literal one, and go off on vacation. See I did it just there, an unnatural jump from one topic to another, much like the disjointed thoughts I have. And don't forget my horrible grammar.....lol..ok so going on a vacation to the lovely island of Cuba (or so I am told). Once there it is my intent to drink copious amounts of alcohol, explore Havana, see Hemingway's abode/boat, explore caves, and generally relax. Upon my return I will try to go forward and poke my nose back in here more often.....so wish me luck and talk to you all soon! 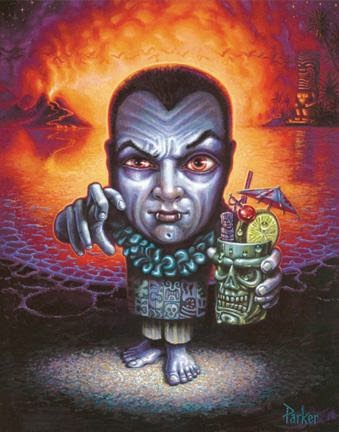 Email ThisBlogThis!Share to TwitterShare to FacebookShare to Pinterest
Labels: Monster on vacation 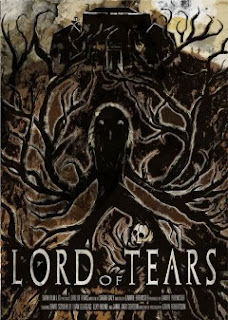 Kount Kreepy was kind enough (or was it really to torment me?) to drop off "Lord of Tears"for me to review.

Thanks to Lawrie Brewster the director for sending  this collectors DVD to review.

This movie fits the bill for creepy movies. The haunting imagery starts strongly right from the beginning and does not disappoint. The tone is like an impending doom that makes you wait and want to know more as the story evolves and has some twists toward the end that many won't see coming, but done in a way that is fitting with the story and characters. Based on urban legend as well as ancient myths gives it some historical setting. If one is a Jungian follower of psychology you could well find that this film will hit that deep seated nerve or collective memory.

There is a dark wintry feeling to the imagery and scenery with brief moments of faint hope for the main characters against a foreboding back drop. Lord of Tears relies on the camera work and ambiance instead of the special effects and CGI that too many films seem to rely on these days. Its like being taken back to when films could scare the crap out of you without the buckets of blood and fancy tricks.
(imagery courtesy of Lord of Tears on tumbler)

I hate comparing films to others as this one surely stands on it's own but for those looking for an idea or "its kind of like such and such" this film has elements of other films I've enjoyed immensely. Some films just stick with you for a long time after and Lord of Tears is no exception to that.

Visually it  has a lot of power and suggestion to it putting me in the mind of films like Ringu (or The Ring in English- a Japanese Horror film) or The Shining (When a building just sitting there gives you the creeps!)

Feeling wise it puts me in mind of Dagon or In The Mouth of Madness which fits in with the Lovecraft style and pace of the film. Given that the budget was from a Kickstarter campaign the film is great.

A part of the film struck a chord with me (I don't think its really a spoiler), the main character finds the taps in the bathroom turn on by themselves. Many moons ago I had stayed at a hotel that was allegedly haunted and awoke to find the taps on. Thinking about it this happened twice at two different locations and both were apparently haunted!

So enough said already. Get the DVD, it has some great bonus features including an interview with the Director who comes across as inclusive with his audience. He is like a tour guide of horror coming along with you for the ride and experiencing what you experience, he just has a few more of the answers and helps put it all into perspective.

Also there is a quick mention of the next project "The Unkindness of Ravens" about:

"Andrew Alburn, a homeless veteran suffering from PTSD is plagued by flashbacks, stemming from a traumatic event he witnessed while in the armed forces. He spends time in a highland retreat where he hopes to overcome his fear of ravens, the dark creatures that trigger and populate his visions. But in the bleak highlands of Scotland, his nightmares manifest into an enemy more powerful than he could ever have imagined." from Facebook

being a veteran myself I can't wait to see this. If Lawrie does it any justice like Dog Soldiers (portraying military characters as more than 2D cut outs) I'm sure it will be a good film.

Thanks for tuning in.- Evil von Scarry

Posted by Evilvonscarry@gmail.com at 20:23 No comments: 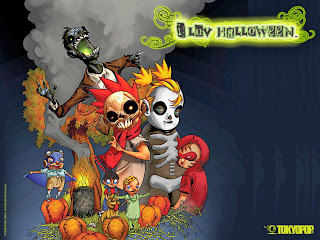 Posted by Kount Kreepy at 22:12 No comments:

Mrs. Von Scarry has started her traditional Halloween themed baking and artwork getting ready
for our favorite day of the year. Ironically our anniversary so I have no excuse to forget it!

Here's some examples of her edible artwork done with cream cheese icing with food coloring and applied with pipping bags. 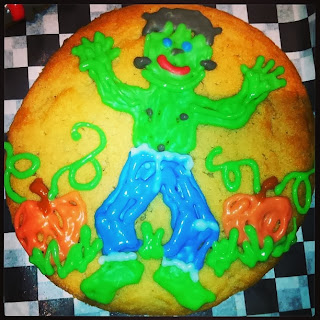 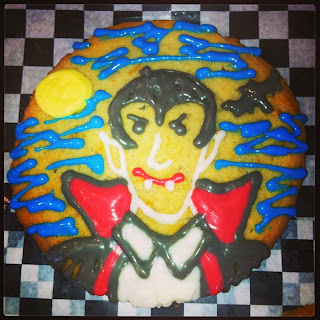 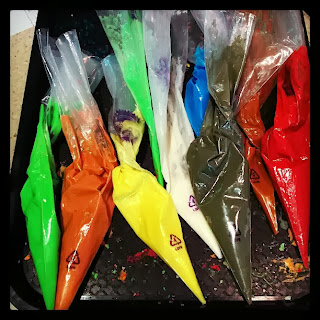 The Pipping bags, she does it all free hand! 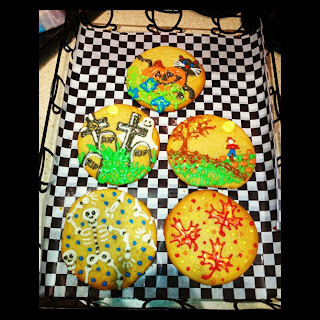 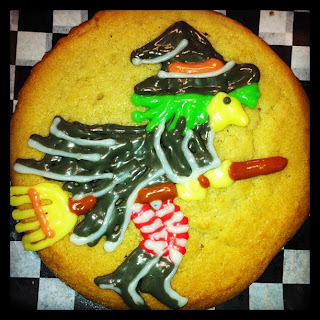 Classic Witch  riding Mrs.Von Scarry's other car, lol. Especially when she doesn't get her coffee. 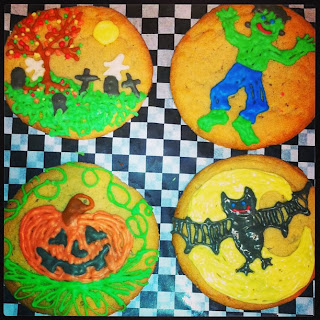 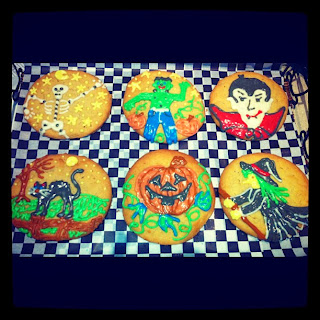 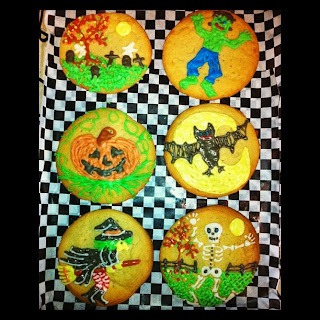 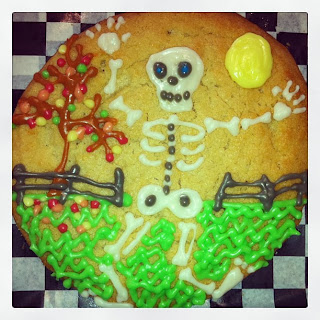 Have a great Halloween and hope these inspire you creative types out there. Be sure to send us pics of your Halloween inspired works and maybe we'll feature them here!

Thanks for tuning in.

Posted by Evilvonscarry@gmail.com at 15:43 No comments:

how pumpkin pies are really made

Saw this one and had to post it LMAO!
I love pumpkin pie just for the record, but I will never be able
to look at it the same way again.
Count down to Halloween - 22 days and a wake up!
-Evil von Scarry 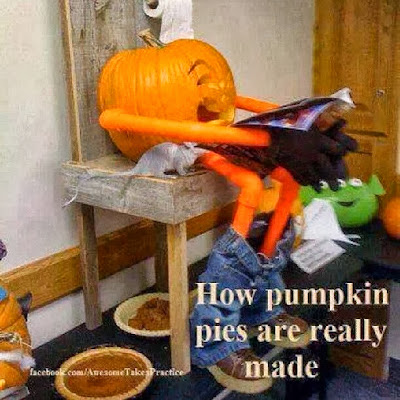 Posted by Evilvonscarry@gmail.com at 20:56 No comments:

Email ThisBlogThis!Share to TwitterShare to FacebookShare to Pinterest
Labels: how its made, how pumpkin pies are really made, pumpkin pie
Older Posts Home
Subscribe to: Posts (Atom)